We’re delighted to be able to share the news of our commission to produce a graphic novel, by Creative Scotland. This morning saw the launch of Time To Shine: Scotland’s first youth arts strategy.

Time To Shine: Graphic Novel is a part of the strategy along with an animation produced by The Gates Film and The World of Arthur Cox. You can view this animation, along with more information about the strategy on: creativescotland.com/time-to-shine

Scottish Government’s Cabinet Secretary for Culture and External Affairs Fiona Hyslop stated she hoped the strategy would “enrich young people’s lives through the arts and creativity.” 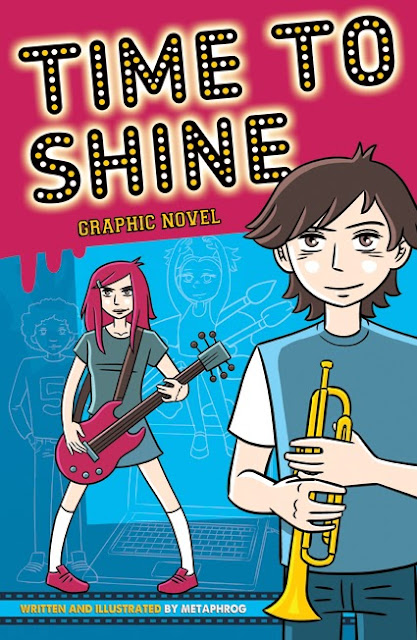 We were originally commissioned over a year ago to produce a work of graphic fiction which would inspire young people and encourage involvement in the arts. The story had to encompass the key themes of the strategy.

The challenge was to create something which would appeal to children of all ages, and we also wanted the story to stand on its own as a good read –  something entertaining! Our task was made easier by the fact that the subject – the arts – is something we have felt passionately about all our lives. We drew inspiration from the many graphic novel workshops and talks we do in schools, and were also advised by young people from Young Scot and Creative Scotland.

It is a story of transformation, in which the arts empower people. We also raised questions such as what is art? and, can you make a living from the arts?

Sam is 14 and he likes all the usual things any teenage boy does… football, music, girls… and avoiding Declan and his gang! He likes to ‘parp’ a bit on his trumpet but it’s his sister who’s the talented one. Jen is 17 and plays guitar in an all-girl band. When their school organises a talent show, Jen’s band are favourites but a last minute hitch means the keyboard player can’t play, so how will the day be saved!?

This original story forms part of Scotland’s arts strategy for ages 0-25 and captures the spirit and energy of young people and looks at the world of arts through their eyes. The arts have the ability to inspire individuals and have a positive impact on communities. Time To Shine: Graphic Novel looks at what barriers may stop engagement in the arts and its positive benefits by exploring three key themes: Let me in!, Help me shine!, Take me there! If you would like to find out more visit: www.creativescotland.com

Here is the online version of Time To Shine: Graphic Novel.

We are honoured to have been a small part of this exciting strategy, and will be posting more soon, with extracts and a bit more behind the scenes information.

The Red Shoes cover and trailer!

New Graphic Novel: The Red Shoes and Other Tales