We had an amazing week travelling regularly to Edinburgh for Stripped, the comic strand of the Edinburgh International Book Festival, attending the mini comic fair and also contributing to the blog with reviews and interviews. Highlights included interviewing Chris Ware and Joe Sacco. 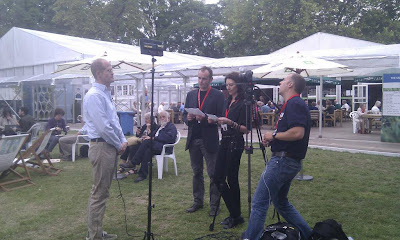 We’ve met Joe on half a dozen occasions over the years but had only seen Chris once before in Angoulême. It was brilliant to have a chat with them both before the interviews and also to hear them in conversation later that evening with The Herald’s Teddy Jamieson.
You can watch the interviews on the Stripped blog here: http://strippedbookfest.co.uk/post/58501195137/comics-are-a-language-exclusive-interviews-with

Teddy had asked us earlier in the summer to submit our top ten graphic novels: choices that would be counted towards a list of the 50 top graphic novels, as voted by a panel of experts. Here’s the clipping, and the online version: http://www.heraldscotland.com/books-poetry/interviews/the-50-greatest-graphic-novels-of-all-time.21864132.

The mini comic fair running over the last weekend of the festival was highly enjoyable and it is encouraging to see so many cartoonists and comic creators displaying quality work. Perhaps even more encouraging was the diversity of visitors. Even though the fair was located off-site: many of the book festival organisers paid a visit as did more than a few non-comic fans.
The concentration of events over the two days meant Charlotte Square was literally swarming with comic creators and comics professionals.

Events were well attended and conspicuously attracted people from among the culturally curious at the festival.
We also wrote a piece for The List on the Stripped weekend events and on the rise of graphic novels, and Bryan and Mary Talbot, and David Fickling were generous with their time, providing us with some quotes.
You can read the article online here: http://edinburghfestival.list.co.uk/article/53653-metaphrogs-john-chalmers-and-sandra-marrs-reflect-on-the-recent-rise-of-graphic-literature/
The quotes were edited to fit the article’s word count, so here are the short interviews in full with illustrations by Sandra:
Metaphrog: You both won the Costa Biography Award this year. What are your thoughts on it (aside from “It’s great!”) and what it means for comics?


Mary Talbot: For me personally, it’s amazing that my first foray into graphic novel writing should be so well received. But for the medium as a whole the award is another accolade, which is brilliant – further recognition of comics as a valid art form. I guess it’s because graphic novels have proliferated over the past ten years or so. There’s an enormous range of high-quality material available these days, in practically every genre and style you could think of. Like Bryan’s Tale of One Bad Rat, both Costa-shortlisted graphic novels don’t just engage existing readers of comics. They have styles that make them readily accessible to a general reader and subject matter that gives them wide appeal.

Metaphrog: Bryan, you have been in the business for many years. What do think of the current interest in graphic novels?

Bryan Talbot: I don’t think it’s current, I think it’s here to stay. As opposed to other times in the form’s history when there have been brief bursts of interest by the general book-reading public, we now have enough quality books in a wide enough gamut of styles and genres to sustain this interest.

Metaphrog: You’ve spoken at EIBF several times already, and EIBF have had a few comics events each year. What do think Stripped means for comics?
Bryan Talbot: It’s yet another example of how graphic novels are becoming increasingly accepted as a valid art form and a timely celebration of the comics medium.

David Fickling took time to tell us about The Phoenix and how it has been received:
The Phoenix has been brilliantly received. Not just by children, but also parents, teachers, librarians as well as authors and artists from all over the place. I have always believed passionately that children love comics and brilliant comic stories and I can only see the market for children’s comics going from strength to strength. We need more comics, ones for younger readers and ones for older too. We need more publishers to produce brilliant graphic novels and comic books for the young. Children want and love comics so it’s up to us to give them the best ones we can. In other countries these markets are huge. Why not here too? We lost our comics, let’s bring them back!

I hope the future holds more comics for everyone. For adults and children but especially children. And I also think comics are perfectly suited to the rush of tablets and devices that we’re all becoming fluent with. Those hi def retina screens were made to portray wonderful artwork and to inspire a new generation of creators. I think this is an exciting time for comics in general and I hope in the years to come The Phoenix will be but one of many brilliant publications delighting people of all ages up and down the country!

One of our contributions to the blog was a short piece on our creative process: http://strippedbookfest.co.uk/post/57056197954/metaphrog-on-making-the-louis-graphic-novels

We very much enjoyed interviewing Stephen Collins (The Gigantic Beard That was Evil) and Garen Ewing (The Rainbow Orchid), and also reviewing several festival events.