We’ve been on a roll doing graphic novel workshops this month! Friday May 15th we were at the Booked! Festival of Words in West Dunbartonshire, working with classes of Primary 7 children. These sessions were really fun! The kids were keen to flick through Sandra’s sketchbook and also asked some very interesting questions, such as “What’s the most difficult part of making a book?” or “How long does it take to make a book?” And of course they did fantastic drawings too. 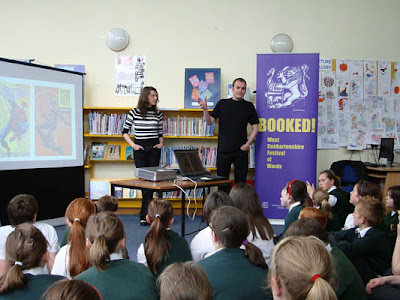 Terry Lanagan, the Director of Education was present during our first session, and he mingled with the children while they were busy creating monsters, the feedback was that he was really pleased, as were the kids.

We ended up sandwiched between the wall and a crowd of children, after the workshop, all wanting their posters and postcards (goodies we brought for them) signed, as well as the festival bookmarks. At one point one asked for his hand to be signed, starting a trend, and next thing we knew they all wanted their hands signed too!

The festival itself had an interesting line up, including Louise Welsh, Ian Banks, Julia Donaldson and many more, as well as a Dave McKean Retrospective exhibition in the Dalmuir Library (on until May 30th).

The day after our session we got a really nice comment on our Louis animation on YouTube from one of the kids: “I’ve met Metaprog, I got their autograph 🙂 And they showed us this, it took Sandra 5 months to make.” It put a smile on our faces for the rest of the weekend.

More pictures from these events can be seen on our Picasa photo album here.

We’ll be doing a series of summer workshops. Stay tuned for more info on this soon!