We had an absolutely wonderful time at The Lakes International Comic Art Festival 2017 and it was an honour to be guests once again this year. We kicked off on Saturday morning with a talk about our new graphic novel The Little Mermaid, chaired by Costa award-winning Mary Talbot, followed by a signing in the Page 45 room (huge thanks to Stephen Holland and Jonathan Rigby for making us so very welcome!). You can read Mary Talbot’s blog about the festival here and Page 45’s report here. 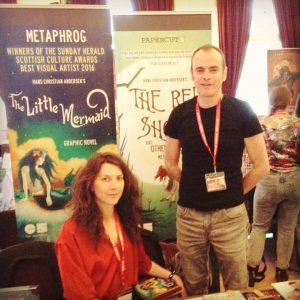 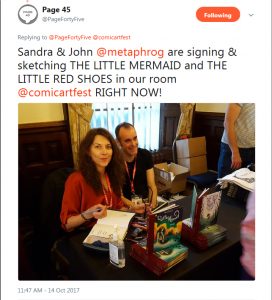 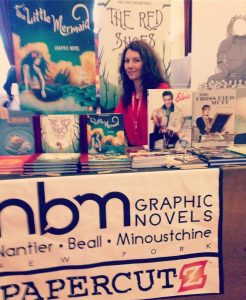 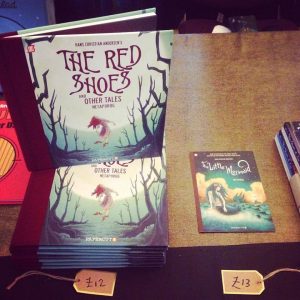 The day involved a fair bit of cloning, because we were also looking after our publisher’s table, NBM/Papercutz, who were exhibiting at The Lakes for the first time this year. A big thanks to our very kind and generous neigbours Jenny Winetrobe and Welsh Eldorado Press for looking after things while we were away multitasking. In the afternoon we also had great fun doing a kid’s event in Kendal library, chaired by the lovely Mel Gibson. By Sunday lunchtime, we had already sold out of The Little Mermaid. So thank you to everyone who picked up a copy and apologies to people who came in the afternoon looking for the book (it is of course available on our website).

With all this, we missed quite a lot of of the numerous events and exhibitions over the weekend – there was so much going on – but we did manage to catch a few things: Sandra saw the fascinating talk on the birth of the graphic novel by Benoît Peeters, chaired by John McShane, which centered on the work of Rodolphe Töpffer. Töpffer (1799-1946) is believed to be the father of the modern graphic novel, and to have written the first ever book on the subject: “How to Create Graphic Novels”. The Lakes festival have published the book, translated, edited and introduced by John McShane. John McShane was also responsible for curating the excellent Will Eisner exhibition upstairs in the Brewery Arts Center. Downstairs we also saw Fumio Obata‘s exhibition on Fukushima, but we kicked ourselves for missing the Archipelagogo exhibition, which looked fantastic. 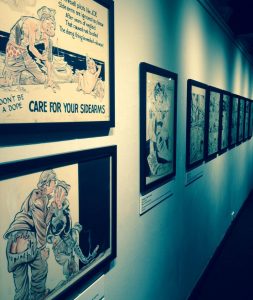 Artwork for The Little Mermaid was also part of the windows trail, at Scratch Creative/Cordwainer’s Studio, right between the train station and The Town Hall. 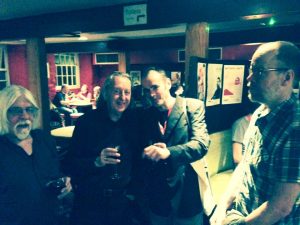 In the evenings there was no shortage of parties and events to go to. Here’s John unwinding with Bryan Talbot, Jason, and Pete Renshaw at the Brewery’s bar.

A really massive thanks to Julie , Sharon and Carole Tait, Jonathan Valelly and the whole team and volunteers at The Lakes International Comic Art Festival, who not only looked after us wonderfully, but made this year’s festival such a success! Their work is so important, it’s what the UK comic scene has been waiting for for decades. Being integrated right into the heart of the Kendal community, it attracts people and families from the whole surrounding region, and not just people who already like comics. In the Clock Tower and at our events we met a lot of people who were not the usual readers of graphic novels but had come to see what the festival was all about, out of curiousity and interest, and these people even bought comics. The festival also works extremely hard to build bridges with the international comic community – this year there were guests from 9 different countries, and the festival is partnered with several organisations internationally (including Toronto Comic Arts Festival). This year they announced a whole bunch of exciting new partnerships, one of which is the Myriad Edition First Graphic Novel Competition which will help launch new talents. The announcements were made at a special reception on Saturday night, to which exhibitors and guests were invited – and at which everyone could help themselves to drinks and pizza. (It was very thoughtful of the festival to do this:  after a long day exhibiting, it was well extremely well received!)

Our very best and warmest wishes to the festival. We look forward to being involved in its continued growth in the coming years!

Had a great time at The Lakes International Comic Art Festival launching our new graphic novel The Red Shoes and Other Tales. In fact we were so busy we completely forgot to take pictures! Jeremy Briggs was kind enough to send us photos he took throughout the weekend.
Thanks to Melanie Gibson for being such a fantastic chairperson, to Page 45 for their support in launching the book and to the incredible festival team for making the weekend such a success and looking after everyone so well.
We only managed to go and see the Steve Bell talk which was packed, but wished we could have gone to more events. It was great meeting and catching with Bryan and Mary Talbot, Simon Grennan, Nicola Streeten, Corinne Pearlman of Myriad, Darryl Cunningham, Sarah McIntyre and Philip Reeve who stayed with us at the amazing Ash Meadows guest house, Chris Pitzer over from the US, John Freeman, Benoit Peeters, Gary Erskine and Mhairi Stewart, Paul Gravett, John McShane, Stref, Bill Morrison of The Simpsons, Matthew Gibbs (thanks for the books!), Stephane Beaujean and so many other great people.

In other news, we are afraid that the winners of the festival’s “Draw a Ballerina” competition have been cursed: brother and sister Alec and Nicky Anderson won a copy of The Red Shoes and Other Tales graphic novel and a pair of red ballet shoes.

However, their mum Sofi Croft, author of YA books, sent us these pictures. It seems the shoes have come to life and her daughter can’t stop dancing.

So excited! Next week is the official launch of our new graphic novel THE RED SHOES AND OTHER TALES at The Lakes International Comic Art Festival co-launching with Page 45!
Our main talk SHINY NEW RED SHOES is on Saturday 17th at The Clock Tower and is chaired by Melanie Gibson – we’ll be signing copies afterwards. Published by Papercutz the book is a beautiful quarter-bound volume.
We are also doing 3 children’s events at the Westmorland Shopping Centre on Saturday and Sunday.
We won’t have our own table during the festival as we have so many events on, and the book will be available all weekend at the PAGE 45 table in The Clock Tower’s Georgian Room.
To book tickets to see our Saturday talk go the festival’s website: http://www.comicartfestival.com/index.php/saturday-metaphrog
We’ve been looking forward to the festival for ages! There’re lots of other great talks and events, so if you’re in the area, do attend. It’s family friendly, with lots of workshops, talks and exhibition, as well as publishers and artists with tables selling their books, and if you want to see 3 talks, you get an extra ticket for free! Children’s events are free too.