We’re delighted to announce that we have been commissioned to do the illustration for IMPRINT BOOK FESTIVAL 2010!

We were honoured and excited to be asked to produce an illustration for the Imprint book festival, and wanted to create an image that tried to capture the electrifying and thrilling possibilities of books. 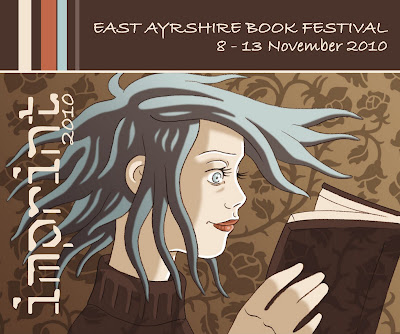 The festival will run from November 8th to November 23rd, and will host many interesting talks.

Our own graphic novel workshop will be on November 8th from 17.30 at the Burns Monumnet Centre in Kilmarnock. Free but ticketed.

2010 sees the 4th year of Imprint, East Ayrshire’s book festival, and another inspiring and entertaining week lies ahead.

One of the most exciting developments this year is the collaboration with Metaphrog, Glasgow-based graphic novelists, who have designed this year’s cover illustration. Metaphrog have received multiple award nominations and critical acclaim worldwide and we are delighted to have worked with them for Imprint.

The festival kicks off with author, actor and tv presenter Sandi Toksvig – guaranteeing to get Imprint off to a flying start. We can also look forward to another packed programme full of best-selling authors and poets with highlights including Tom Leonard, ‘The Two Sides of the Pass’ event where poetry and visual art combine and a whisky-themed finale. Imprint has become an eagerly anticipated highlight in Ayrshire’s cultural diary and we look forward to welcoming you throughout the week.