The past year has been such a whirlwind of activity, we ended up not getting a chance to blog about some of the things we had planned to, and had really enjoyed. Between all the author visits around Britain, the illustration jobs, convention visits, the work on Skint! and the new Louis graphic novel, we really didn’t have moment’s rest. But one of the schools in particular we wanted to write about.

We started the first day by giving an illustrated talk to the whole school and then delivered carousel workshops to smaller groups of children helping them to produce their own comics. 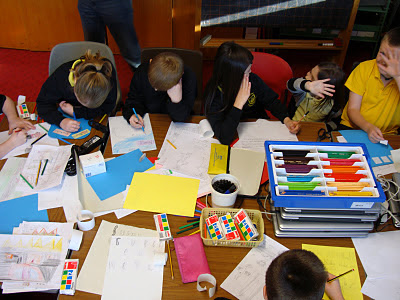 Some fantastic ideas developed from original character sketches to finished comics. Some of the comics even had barcodes!

We had three fantastic days. The children didn’t really realise just what they could achieve until they finally had their finished work in their hand.

To show their appreciation they made a thank-you card, complete with a drawing of us, and even gave us a box of chocolates! At one point, one of the kids must have got wind that it was Sandra’s birthday that day, and they all sang a surprise happy birthday song in the classroom! It was really touching.

More pictures can be seen on our Picasa web album here.