Stripped is here! A celebration of comics and graphic novels at the Edinburgh International Book Festival. Over the years the festival has featured a number of graphic novel events, with guests including Neil Gaiman, Alan Grant and Bryan Talbot. We had the honour of participating in the festival a few times, doing sold-out comic workshops for children, and were also in conversation with Shaun Tan (you can read our guest blog about it for The Guardian here). This year the festival organisers were in touch with us and other industry insiders as advisers. We’re looking forward to events and are delighted to be contributing to the Stripped blog – look out for our exciting interviews and reviews! We’ll also be exhibiting at the mini comic fair, along with other Scottish independent comic creators, on August 24th and 25th. 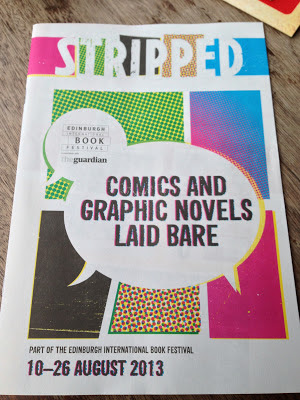 The festival is dedicating a whole weekend to graphic novels with some 40 events. We’re particularly excited to see Chris Ware and Joe Sacco! Bryan and Mary Talbot return after their ground-breaking success winning one of the Costa Awards. Other exciting events include: Posy Simmonds; Hannah Berry in conversation with Neil Gaiman; Warren Pleece; Grant Morrison and Stephen Collins. Family events include workshops and talks with The Pheonix, Gary Northfield and Garen Ewing among many others. These are just a few highlights. You can view the full programme on the Stripped website.

The Stripped brochure itself looks amazing and captures the very feel of graphic novels: fresh, exciting and modern. It also includes a fantastic write-up by Paul Gravett about the medium: Why we love comics and graphic novels. Paul will be doing several events as an industry expert and enthusiast of over 30 years. Do not miss them if you get a chance!

Last Thursday we had the pleasure of attending the festival programme launch, and, as ever, the speeches were really passionate about literature. The festival has a reputation for being at the forefront of innovation, and the Stripped strand, as well as the graphic novel events of previous years, are testament to this. We took these pictures after the launch: behind the scenes with Janet Smyth and Nick Barley on a promotional shoot. EIBF is 30 this year!

Since our beginnings in the mid-nineties, we have seen graphic novels go from a niche interest to gradually getting mainstream acceptance. This is thanks to the dedication of many artists, writers, publishers, distributors, festival organisers, comic shop owners, the comic press, academics and comic lovers. We ourselves have always endeavoured to take comics out of any perceived ghetto, and our Louis graphic novels have indeed attracted a following and media interest outside of the comic industry as well as within. Most recently Louis – Night Salad was Highly Commended for the Scottish Children’s Book Awards.

Of course, the buzz about graphic novels has come and gone over the years. The eighties had the big three (Art Spiegleman’s Pulitzer Prize-winning Maus, Alan Moore and Dave Gibbons’ Watchmen and Frank Miller’s Batman: The Dark Knight Returns) and “comics grow up” headlines, but this was followed by a real slump in the nineties, when comics were seen as somewhat less fashionable. However, since then, graphic novels have gradually been building up a new wave of interest, and there are now tonnes of exciting books out there proving that graphic novels are a medium not to be ignored. Chris Ware winning The Guardian First Book Award, Bryan and Mary Talbot winning a Costa Award, and now this Stripped event at the Edinburgh International Book Festival, are the result of what has been slowly brewing up for years.

We hope that the festival will continue to support comics for years to come.