Can’t believe another year has gone by already! It’s been another incredibly busy twelve months – hardly had the chance to take a breath.
As well as travelling regularly for author visits we had the opportunity to create illustrations for manifold projects.

This year saw us commissioned to create a graphic novel, and we spent the summer and most of the autumn working round the clock to produce it. At this moment we still can’t say much more about it, but it should be released in 2013. 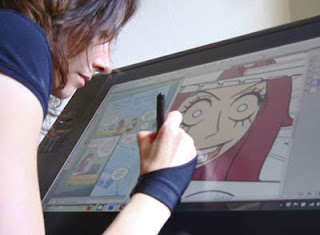 Our short story The Photographs was published in New Writing Scotland 30, the first ever piece of comic form fiction to be included in the anthology.﻿﻿﻿﻿﻿﻿﻿﻿﻿﻿
﻿﻿﻿﻿﻿﻿﻿﻿

New Writing Scotland 30 was included in the annual literature round-up in The Skinny.

Sandra got to create some fun illustrations for the Pig titles by Barabara Catchpole for Ransom Publishing, a series of six books for ages 7-12.

She also had the pleasure and privilege of creating illustrations for an iPad game, Book of the Dead: Afterlife for Kelvingrove Art Gallery and Museum, as part of the British Museum’s touring exhibition Pharaoh: King of Egypt.
﻿

All these projects were highly enjoyable!

Author visits took us all over Britain and even as far afield as The Netherlands!

The Netherlands trip saw us invited to Eindhoven for two days of talks and workshops at the vibrant and bustling International School.

It was a pleasure to speak at the Advance Higher Creative Writing Conference at Edinburgh University – our workshop was filled with highly-motivated and bright-eyed students. Also speaking there were Alan Bisset (as keynote speaker), Roy Gill, and the wonderful Cathy MacPhail (we just thoroughly enjoyed reading her book Out of the Depths).

And, it was an honour to be invited as keynote speakers at the National Literacy Network Meeting at Stirling University, where we spoke to over 70 delegates. It was an opportunity to discuss comics and graphic novels and their increasing popularity in our culture and indeed in the classroom. We wrote a blog summarising our thoughts on comics in the classroom here.

We also visited Wales for a fun two days of workshops with KS2 pupils, and returned to Taunton for the third consecutive year for a talk and full day of workshops.

For the past few years we’ve been participating in the Aye Write! festival, and this time we also had the pleasure of meeting the incredibly funny and hirsute Philip Ardagh (The Grunts) and the equally funny Jonathan Meres (The World of Norm). Here’s a drawing Sandra did recently of Mr. Ardagh on tour, although even the keen-eyed reader may have difficulty spotting him. And we’ll be back for Aye Write 2013! This will be our fourth year and we’re really looking forward to it!

We also visited a host of schools and libraries around Scotland, and other events included talks in Dumfries with the Scottish Book Trust for the Scottish Mental Health Arts and Film Festival, and sessions at the really inspiring Gallashiels Museum!﻿﻿﻿
﻿﻿﻿﻿﻿﻿﻿﻿

Most recently we were part of the first ever Book Week Scotland, which took us to various places, including a school, a library, CRISIS centres and also a prison! We met people from all walks of life.

Every year, children’s authors and illustrators gather for a Xmas lunch in Edinburgh. It’s a great way to catch up and to round off the year, and this time was no exception. Sandra took the picture and you can see Keith Gray, John Fardell, Linda Strachan, Vivian French, Alette J Willis, John Ward, Keith Charters, to name a few, as well as the top of John’s head somewhere in the middle.

And we couldn’t resist re-posting these photos Sandra took after one of the previous Xmas lunches a few years ago in Edinburgh.
﻿﻿
﻿﻿

Graphic Novels in the Classroom Olympia Building Workshops with P7s