In 2011 we worked on the graphic novel Skint! with playwright Gowan Calder. The book was commissioned and published by the Scottish Book Trust and distributed free in Scotland. It was such a big success that Standard Life Charitable Trust and the Scottish Book Trust commissioned a second Skint!, this time for England. Skint! for England was released in January 2014 and is available in print (45000 copies) and online.
We were commissioned once more, along with Gowan Calder, to rework the book to suit the different demographics in England. A few characters were changed throughout the book, and Sandra took the opportunity of reworking the colouring too while she was changing the drawings and Gowan updated and refreshed the script.

Skint! is a free graphic novel resource to help people develop good money skills and prevent them from sinking into debt, launched in England by Scottish Book Trust and Standard Life Charitable Trust.

Skint! is athought-provoking graphic novel that harnesses the power of stories based on real life experiences to bring money management to life. It is targeted at the adult learning sector in England to help tutors support 16-26 year olds, with a particular focus on young people who are not in education, employment or training (NEETs).

“Skint! uses the power of language and drama to engage young people in financial decision-making, enabling them to develop some of the fundamental skills and understanding they need to help them keep track of their finances, to plan ahead and think through the impact of financial decisions. The aim is to help young adults, in particular reluctant readers, to develop their literacy, numeracy and financial capability, in the hope that this will help them on the way to a future unburdened by money worries.
www.skintbook.org.uk
﻿

Skint!, the graphic novel/play we worked on for the Scottish Book Trust, along with the playwright Gowan Calder, was featured on BBC Radio Scotland.

We’re really happy to have been part of this fantastic project! The “Sunday Morning with…” program features interviews with young people and tutors.

The show is available to listen to online for a short time here: http://www.bbc.co.uk/programmes/b01f50bc

The book also was featured in The Herald in November 2011. 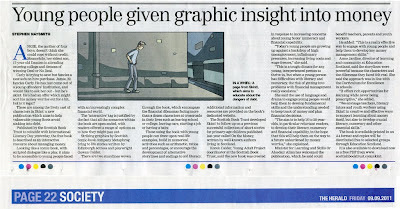 We had a fantastic time launching Skint! last month at the International Adult Literacies Conference in Stirling. Members of the Scottish Youth Theatre re-enacted a small part from the book/play, with our artwork as a backdrop, and it was amazing. The actress playing Carly actually looked like Carly in the book (strange to see as the drawings were created long before).

As part of the launch we gave a short speech, along with Gowan Calder who wrote the script, talking about how the project was put together. It started with Sandra sketching out a few characters while Gowan was busy thinking about the script. Here are some of them: 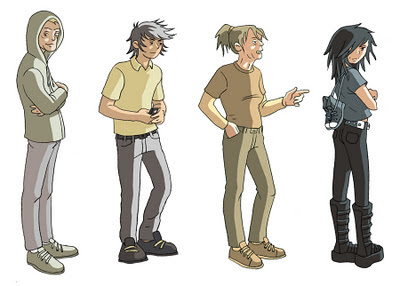 In the book, the character gallery ended up like this (again, selected characters here only):

Because of the unusual nature of the project we decided to proceed slowly at first, with Gowan producing a couple of very rough pages of script, just to get a feel for what the images would bring, and thus know what she could leave out in the script, in terms of direction, character and location description and so forth; as well as allowing everyone to grasp the interaction between characters and between the text and image pages.

Then Gowan worked towards a final draft from which rough layout pages were created. These had to be approved before any final artwork could be started. This stage was actually quite straightforward and we completed the layout for the entire book over a period of four weeks. Skint! is quite an unusual and experimental book in many ways, as the script is on one page and the artwork is on the facing page, much like in a traditional illustrated book. It is designed mainly to be read in a group for role playing: although it works well too for individual reading. We produced the graphic novel pages so that they enhance the reading of the script and set the scenes, as well as developing the characters. 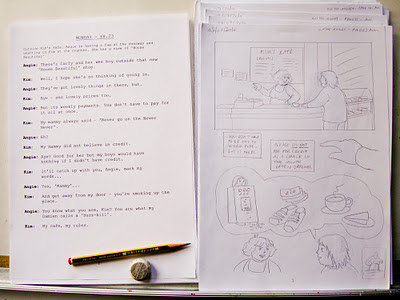 The final pages were pencilled and then directly coloured on computer (after a clean up of the pencils in Photoshop). For the Louis graphic novels, Sandra had been painting by hand with acrylic inks and then inking by hand over the colouring, so this was a nice change. 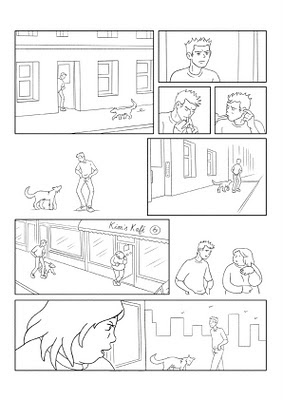 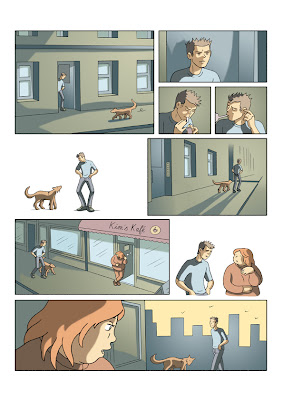 One of the finished panel images, one of our favourites, from Jamie’s story: 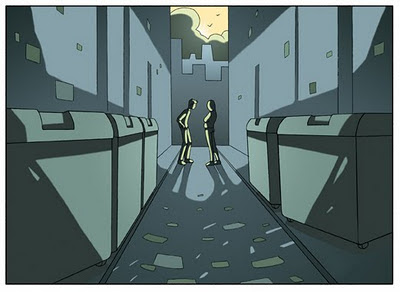 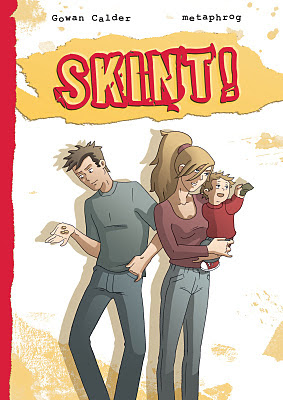 Over the past year and half, we’ve been involved in a top secret project, which we can now reveal!

Scottish Book Trust, in partnership with Scottish Government, commissioned us to work on the book Skint! in collaboration with actor, director and playwright Gowan Calder.

Skint! is an interactive, learner-centred money management resource for 16 to 26 year olds in supported youth groups.

It’s a thought-provoking and interactive book with mutiple choice endings, with a colouful, engaging and fun script dialogue provided by Gowan, and graphic novel illustrations provided by us. We also had great fun working on the cover and book design! We’ll be posting some samples from the interior pages here soon. 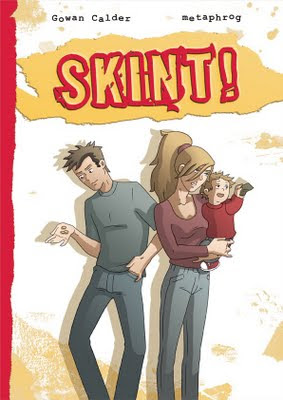 It’s been a real pleasure working on this challenging project, as part of a great team of really dedicated people! We’ve loved every minute of it!

Now we’re looking forward to the launch of the project on September 8th 2011 at the International Adult Literacies Conference in Scotland.

Skint! will also be available through Scottish Book Trust’s website as a downloadable PDF, and in accessible formats (sign language and audio versions).

For full information on this project, please visit www.scottishbooktrust.com/skint