Our comic adaptation of Edwin Morgan’s First Men on Mercury poem was featured in The Scotsman on Friday, as part of an interesting article on science fiction and Scotland, by Pat Kane.
Read the online version of the article here: http://www.scotsman.com/news/pat-kane-beam-us-scotties-up-alex-1-2353626

The First Men on Mercury Sketches

The preparatory sketches Sandra did for The First Men on Mercury comic adaptation of the Edwin Morgan poem. 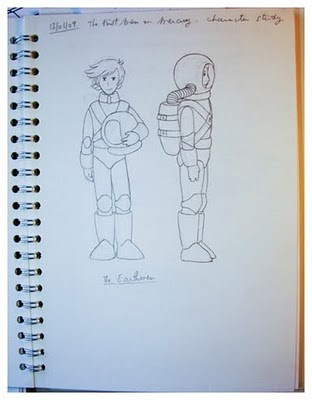 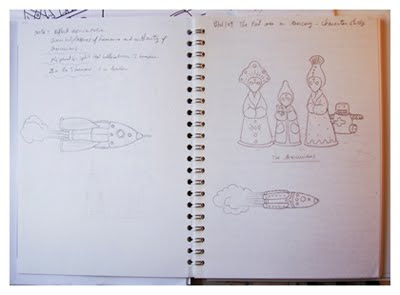 STV’s The Hour, featuring Liz Lochhead talking about our comic adaptation of Edwin Morgan’s poem The First Men on Mercury.

THE FIRST MEN ON MERCURY ON TV

STV’s The Hour featured our comic adaptation of THE FIRST MEN ON MERCURY on National Poetry Day, as a way of interesting children in poetry visually. Liz Lochhead, Glasgow’s Poet Lauteate, made an appearance on the show reading and talking about poetry.

THE FIRST MEN ON MERCURY

Today, 32 500+ copies of our Edwin Morgan comic adaptation, THE FIRST MEN ON MERCURY, are being distributed to all pupils in Glasgow Secondary schools, to celebrate National Poetry Day.

For those of you who have left school long ago or don’t live in Glasgow, you can read the comic online at www.metaphrog.com/mercury. We wanted to make this site a little bit special, and so have added some behind the scenes information on the making of the comic. Educators will also find teaching notes for the classroom.

The project was originally commissioned and is published by the Association for Scottish Literary Studies. 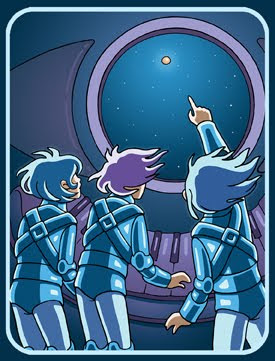 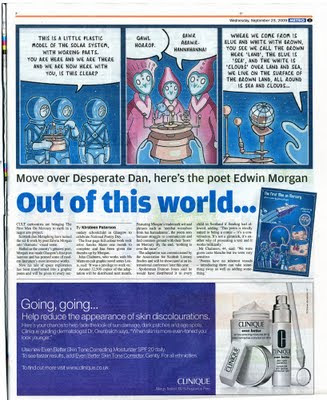 To mark National Poetry Day – 8 October 2009 – the Association for Scottish Literary Studies will be distributing over 30,000 copies of the comic-strip adaptation to every secondary school pupil in the poet’s home city of Glasgow. The comic will also be available to read online at http://www.metaphrog.com/mercury

We are honoured to announce that the Association for Scottish Literary Studies has commissioned us to produce an adaptation of the poem The First Men on Mercury by the great Edwin Morgan. It will come in the form of a four page, full colour comic, and will be published as a pamphlet given out free in Scotland in autumn 2009.

We’re thrilled to be working on this. Adapting poetry into comics is proving to be a really interesting project, and the poem being largely dialogue based, is ideally suited to this. You can read the poem itself here.

We’ll be posting more on this as the project develops.